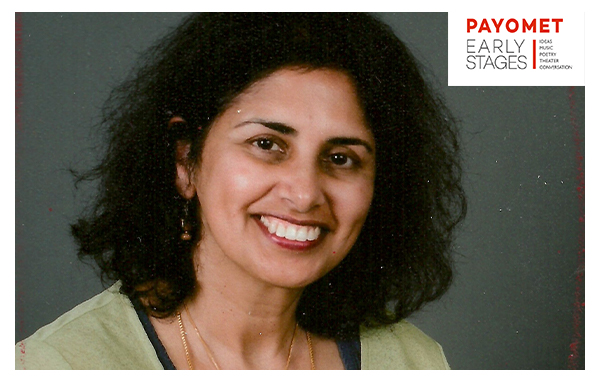 EVENT LOCATION: In your home via Zoom…FREE!

The Tiny Tent’s Live Early Stages conversations continue with a reading and discussion featuring critically acclaimed local author Indira Ganesan. Indira is the author of three novels: The Journey, Inheritance, and As Sweet As Honey. A moderated discussion will follow with Janet Lesniak, Executive Director of the vibrant community and cultural center, Wellfleet Preservation Hall.

Payomet Performing Arts Center in Truro, is a 501 (c)(3) tax-exempt non-profit organization located at the Highlands Center in partnership with the Cape Cod National Seashore.

Published in the year of his death from cancer, Henning Mankell’s After the Fire is a slow examination of a seventy-year-old’s confrontation with solitude and loss.  The protagonist, a retired doctor,  lives in a archipelago being visited by an arsonist, and we begin at the site of the first fire. Finding the arsonist is relegated to the background, as what it means to live in a community where trust is replaced by wariness is explored, even as death and old age is the larger specter in the forefront.  Yet this is an optimistic novel, where friendship and family, however distant, is embraced, sometimes gingerly, sometimes with affection.

This was the one of the last books I read before I broke my wrist, but not the last book I’ve read since.  There was a fatalistic stoicism in the narrative that strikes me deeper as  I now try to fill my days with no-impact activity.  Thus constrained to cat care, lackluster weeding, a great deal of sighing, a fascination of one-handed bottle opening techniques, elevating my arm on pillows, watching repeats of mysteries, instagram, I am reading with an awareness that my situation could have been worse.  The Great Believers by the quite brilliant Rebecca Makkai, a Claire Messud novel, Elif Safak‘s Forty Rules of Love,and a wonderful novel by Caitlin Macy called Mrs. Now, biding my time, easing insomnia, I am romping through Kevin Kwan‘s Crazy Rich Asians, which will become a film*. it has an all-Asian cast, for it is story about Asians.  Apparently, one filmperson wanted the heroine to be re-cast white, but no.  She will be a wary non-rich, non-crazy Asian woman portrayed by an Asian.

Sometimes  the fates shift the balance.

*the book is different than what the film preview shows, from dialogue to fashion, alas.

It’s War & Peace.  I am about two hundred pages to the end.  Tolstoy has analyzed and reanalysed the crucial battle in War of 1812 between the French and Russians in Borodino.  He has come up with two excellent metaphors, one of which is likening the two sides to duelists, which makes you sigh with pleasure for there had been such a duel between two men a thousand pages earlier.

It is a hefty, gorgeous book.  In the new translation by Richard Pevear and Larissa Volokhonsky, pages of French conversation spoken by the Russian elite are left intact, translated in footnotes at the bottom of the page.  Other notes are in the back of the book.  Having spent a good deal of the summer watching Scandinavian TV in subtitles, I found if I skipped right to the translation, I got nearly everything except when I had to return to the original for the English.  Here is my metaphor: it was like playing table-tennis, running from the translated English to the subtitled (footnoted) English several times on any one page.  If one knew French well enough to read (which I do not, nor in fact, know it well enough to speak) one could understand the way Tolstoy satirized a people so enamoured of France whom they would be shortly at war by their misspeaking the language.

So, that was an aspect that I would not have the pleasure of enjoying.  But that left me quite a deal to enjoy.  I am reading War and Peace because the last time I read it, in college, intrigued by the Audrey Hepburn movie, I had skipped right over the war to learn all about Natasha at home.  For years, I thought I had read at least half of the book, when to my chagrin, this summer I discovered if I read it at all, I retained very little.  So when the plot twists arrive, and they do, in translated English with ferocity, I was caught unaware.

I began early July, a few pages every night and in the afternoon, asking a Russian-American  friend about this history I had never learned in school at one point.  Knowing how I had obsessively googled information about The Tudors while watching all thirty-eight episodes of that glittery, tawdry, engrossing fantasy, I did not want to do the same about Napoleon or Tolstoy.  Well, I did google a bit about the royal Russian family, and Napoleon will soon be researched. (It was Josephine, “The real wife,” as Tolstoy put it, who brought so many roses to France.  That history is refered to in Chasing the Rose by Andrea Di Robilant.) But back to War and Peace.

Three hundred pages from the end, not being able to take it any longer, I sneaked a peek at the ending to find out what did happen to some of the characters.  Readers, I did not fling the book away.  I went right back in, still surprised as the plot turned, as Tolstoy brings back characters I had forgotten about, evoking a supreme sadness about the arrogance that takes lives.  War is arrogance, after all, a need to fight and prove which side is better, which side is best.  No matter the victor, no one is convinced in the matter.  The sun was in everyone’s eyes.

If Anna Karenina is the best novel to read in the winter, then War and Peace works very well in sultry summer, where the battles take place in winter, and Christmas can be read about in July.