There Are Always Sweet Peas 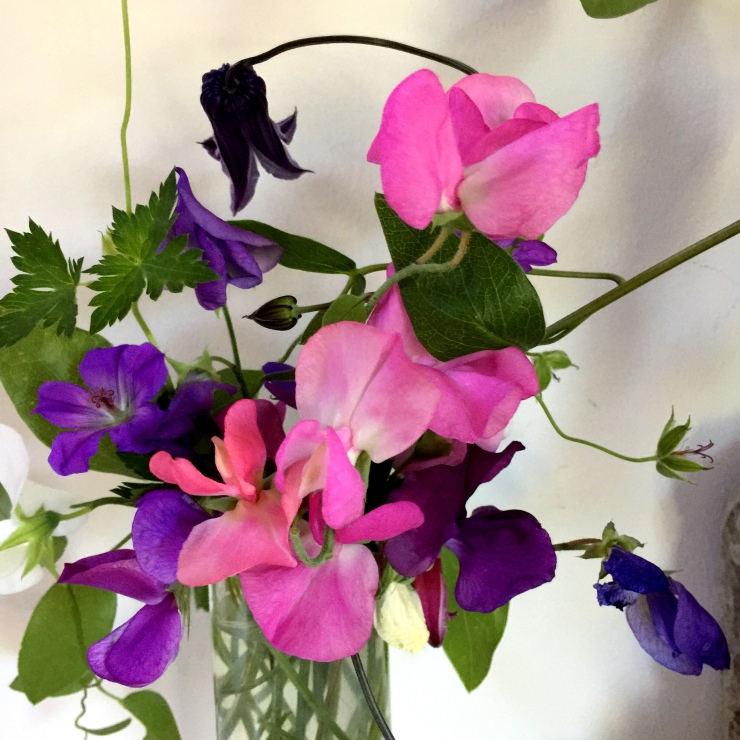 How prescient or coincidental or hubristic I wrote about my roses last week.  Bragged if you will.  Yesterday I went out to prune them, and did a fairly good job in creating empty vase shapes, taking out dead and skinny branches, despite my trepidation in cutting a living, budding thing.  I did notice that the branches had splotchy markings, and much later I investigated.

Rose Canker.  A virus of the rose that appears as splotchy spots of purple and brown, which will ultimately destroy the rose.  After researching numerous sites, including the agricultural extensions and rose societies, I determined I did infact have to act fast, and cut down each affected branch to a several inches into good healthy growth.  After my radio show, I went out with the hand pruners and tried my best.  I hacked away at my newly pruned beauties, and discovered the damage was too severe.

With heavy heart I went inside and called an old friend for sympathy, and then called my local expert at the nursery who promised to take a look.  I admit I was deeply upset.  Five bushes in all, and no recourse but to dig them up.  Then I visited a gardening friend to get some seeds for another friend, and looked at her roses, which also had canker.  I wondered if I had been too rash in cutting down the bushes so severely.  Perhaps I could have let them bloom, and enjoyed the roses until the plant gave up.  Kind of like my plan for my beloved ’92 Honda Civic.  But when the Honda began falling apart, yet still had life in her, I traded her ruthlessly in for fifty dollars toward a newer model, regretting the purchase all the while.  They don’t make Hondas like the ’92 anymore.

After a while, I rememembered I had to plant the sweet peas I had soaked overnight.  I constructed a wigwam, amd sowed the seeds.  In a week, if I am lucky, they will poke their heads out.

Meanwhile, the world as we know it has changed rapidly.  Universities, museums, and public institutions have closed to combat the spread of Covid-19.  We are told to socially distance ourselves and wash hands constantly.  The shelves are emptied of paper products, though I still fail to see the connection.

Gardening is the balm.  Getting fresh air, working in the soil, and planting for the future.