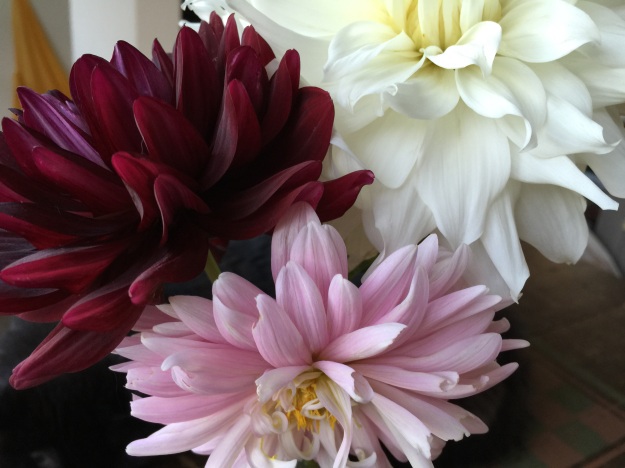 I think it’s been said before that weeding a garden is like editing, getting rid of what is excessive, creating more room for the essentials to grow.  I first heard the editing metaphor from a wise friend who applied it to her home.  Instead of using the trendy concept of “decluttering,” editing her space made it sound more mindful, more serious.  So, I edit the garden as autumn comes with its cool weather, right on time.  The geese, the ones who leave, have returned, and primary colors of summer are fading.  So much in the garden was attacked by downy mildew and black spot.  I let the crabgrass alone, and it grew in a verdant lush.  So today, I waded in, and pulled out dying purple-flowered mint lookalikes, and pushed upright the oregano which was beaten horizontal by a storm, uncovering tender rosemary and chocolate mint.

The previous gardener planted the oregano, the sage, and thyme.  I added dill, more lavender.  The bees, honey and bumble, are feasting on the oregano flowers, and the catmint.  After the oregano dies back, I am thinking of clearing some to plant another rose, a strong scented one like Gertrude Jekyll, or Jude the Obscure. I think I’ll add more white flowers next , for the effect at night.  The success I had with white cosmos planted with seed my first summer has never been repeated, and I think I will move on.

Editing.  What can be reined in, what can expand to fill the bare spots? And how will the end match the spontaneity of the spring, the opening?  I would like to bring in some orange for the autumn.  There is an American beauty dahlia that is quietly blooming, and the purple Diva made its emergence last week like Barbara Streisand at the Harmonia Gardens restaurant staircase in Hello, Dolly!

Maybe, next time, a grouping of one kind of dahlia, instead of lonely specimens.   Geraniums in the front.  The experimentalization giving away to the tried and true. For a kind of subconscious closure, I planted some sweet peas among the morning glories, and they are about six inches tall, their tiny tendrils looking to grab onto something.

It’s all about death and dying and rebirth, isn’t it, the seasons, and literature?