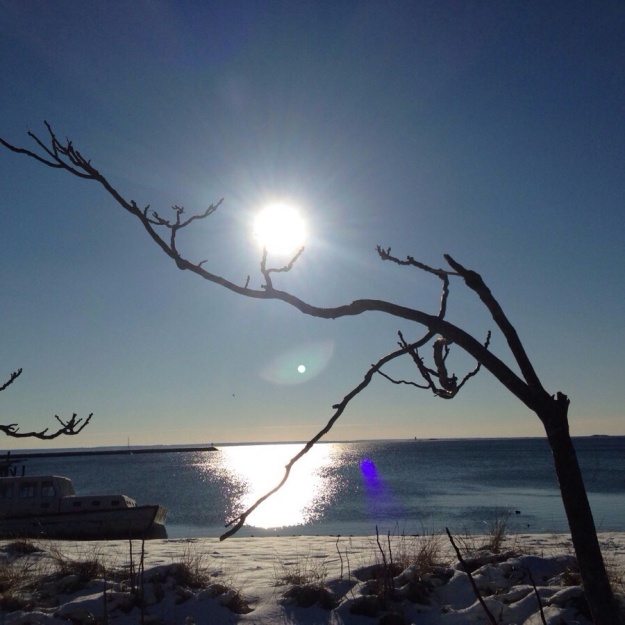 I heard the coyotes again last night– arise of yelps pitched high with barks. I once saw them a year ago circle in the horse farm, late at night. Was it coyotes New Englanders heard when they condemned women as witches at Salem? They did the same in England. The sound is unearthly, frightening, because there is an edge of agitation, animal unease. I thought my cats would dive under the bed at the sound last night, but they were merely alert, curious for a while.

Now it is later, and it has been raining since yesterday. A gaggle of geese and ducks are swimming in the neighbor’s lake that two days ago was a field. The horses still have pasture, but I their coats are wet and dirty from rolling in the mud. The white horse died a month back, from age, I think. She did not want to get up, but when pushed, her owners walked her around the pasture. I spied from a window, unable to move away, as they called the vet. Later, a day later, a bulldozer came to dig a grave, and she was buried. She was old. When I fed her carrots last summer, she was hungry, but could barely chew. A new horse came to stay in the fall. So the number is back to five. I wanted to offer my condolences, but did not know what to say, or how. Still, I might have gone down to the farm, to show my respect.

A circle of condos surround the horse farm, and I have been told that long ago, children rode horses where I live now. I am in my third and possibly final spring at the Long Term Residency at The Fine Arts Work Center, and since I moved in, I have been grateful for the presence of the horses. Today I am grateful for the rain which seems to finally usher in the season, though there might be urban flooding.

If this were a Garcia Marquez story, a very old man with enormous wings would appear in a backyard. Maybe he already has. As it is, the geese honk, the rain patters, and  the cats are busy watching and bathing.

As I finish up this post, the rain has given way to wind, howling.