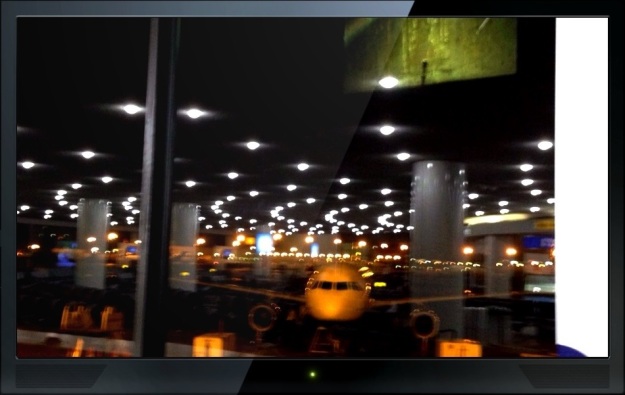 It is Super Bowl Sunday in Newark Airport, when the game is being played at the Meadowlands. The bar patrons are cheering and groaning as the game gets going. Flights have been cancelled mysteriously, and I suspect there must be a savvy lounge where the higher ups in the company are stretched out and watching the game instead of flying. Why not? Bridges can receive planned traffic jams, so why cannot passengers who thought to a)be home in time for the game b) beat the traffic by flying on a day when few would fly or c) simply were not thinking about The Game, find themselves stranded due to mysterious jet ailments?

Ice cream was a brief consolation, followed by an attempt to watch a game that I don’t really know well and fear for head injuries among the players. Still, I watched the kickoff and listened to the commentary around me, leaving only after the excitement grew to be less interesting as words got louder.

Remarkably, I hear an announcement, reminding me I am in an airport. I have always loved air travel and airports, the buzz of foreign language, the whiff of glamour and energy of those bound for Elsewhere.

But now I’d rather be Elsewhere, instead of waiting for a flight, with my connecting flight cancelled, and going home delayed by a half-day. The half-time score was announced over the PA. Talk about sadness, except of course for the team in the lead.

2 thoughts on “Sundays at the Airport”