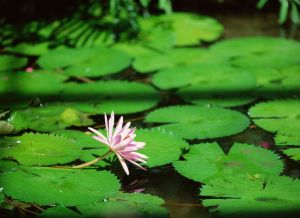 When I first heard yoga students chanting Vedic verse in  Sanskrit, I was living in Sag Harbor. The sounds wafted from an upstairs window on Main Street.  I wanted to go in, but I was scared off by a very intimidating newspaper article on the studio I found on the web, so I found another place, with a Yoga teacher, who is a life-long friend now.  But I will never forget that chanting, how deeply impressed I was with the Westerners in that studio.

Six years later, I have participated in the chanting at my beloved yoga studio in another state, thrilled to know the words and what they mean.  It is more thrilling to hear the voices of my teachers and students around me.Throughout my life, I have winced at the pronunciation of Indian names by non-Indians, much like a French speaker would wince at my French.  I never correct, because I know from trying to correct the pronunciation of my name only leads to repeated mispronunciation, only louder. They get the pronunciation right at my studio.

Sometimes I am aware of the meaning of the words as I chant, but because I am not fluent in Sanskrit, I only know the words, and read the translation later.  It was the same at home, at the family shrine, and later, at the Hindu temple, which had been converted from a Greek Orthodox church on Lexington Avenue in Queens in the early seventies.  Not only did I not know the literal meaning of the prayers, but I was not especially encouraged.  I was perhaps even discouraged from it, because, after all, that was why there were priests, to perform puja on our behalf.

It was different for boys–isn’t it always?  Brahmin boys at puberty had to memorize great lengths of verse, including the Gayatri Mantra, before they received the holy string to wear diagonally across their bare chests.  There was no “bat mitzvah” equivalent for girls.  When my brother received his ceremony at his marriage, having skipped the function in his teens, I tried to learn the words silently alongside him, like Yentl, but lost interest, since the attention was on him.

So now I chant and learn to chant, and meaning still remains elusive. I suspect I’m out of tune, which I try to correct by going an octave lower, a matter of pronouncing  louder, I suppose.  A Buddhist friend of mine used to chant for the bus to arrive, and in the studio, we chant for happiness to all sentient beings.
Sometimes before the opening chant, I send out a hope that I will keep returning to the mat. At the end of class, we often give away the practice into the fire of the practice.

Snow fell last night, covering tulips and the plum tree. I can see my breath in the air. The grass pokes through, green.